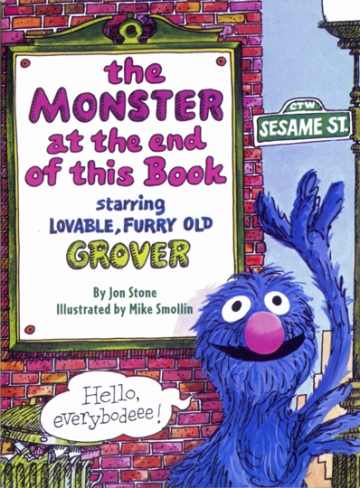 Well,my attempts to change my inner self talk to positive statements are failing laughably. How are yours going? For every, “I’m strong!” and “I can do this!” several dozen, “I can’t take it”s and “It’s too much”es creep in.

We had a book when I was five or six called The Monster at the end of this book. On the first pages, Grover reads the title of the book and gets scared. He doesn’t want to see the monster! So he comes up with the plan that we — he and the reader — just won’t turn the pages. If we don’t turn them, we’ll never get to the monster, and we’ll be safe. Of course you, the reader, keep turning the pages, and Grover gets more and more frustrated with you, and more and more panicky as you get closer to the end. It’s hilarious.

When my mom started to read it to me, *I* got scared. I was firmly in Grover’s camp. DON’T TURN THE PAGES MOMMY! I remember crying hysterically until she hid the book safely away in the top of a closet. It wasn’t until we moved when I was almost eight that we remembered the book was there, and found out that *SPOILER ALERT* — GROVER was the monster at the end of the book all along! “I, loveable, furry old Grover am the monster at the end of the book. And you were so SCARED.” Well, yes, Grover, I was.

Back to the almost present, three days ago, when the snow piles and consequent traffic was so ridiculous that I decided to take the bus to work instead of drive. The bus was right on time, I thought, till a fellow passenger told me that it was actually the one that was supposed to come an hour ago — she knew because she’d been waiting that long. Once I got on the heated bus I shed my hat and gloves and unknowingly dropped my sunglasses on the floor. A kind, middle-aged, gentleman tapped me on the shoulder and handed them to me, sparking a train of thought about the goodness of most people and how we still help each other out even when we are stressed. Then the same man suddenly yelled out the window,

before lapsing back into a meditative silence. The rest of the passengers looked over in brief surprise, and then went back to their own thoughts and lives.

Yesterday I drove again because I had to take the little girl I nanny to school. The roads were — are — still awful. Many two-way streets are reduced to one narrow lane with walls of snow on either side. Tempers are running short all around. The three mile drive to the girl’s school took almost half an hour. I thought I was handling the stress pretty well, but looked down after a particularly stressful incident involving a taxi and saw that I had chewed my thumbnail down till my finger bled.

Then, amidst all the honking and close calls, a woman tried to merge in front of a man behind me and he got angry. He jumped out of his car, leaving it sitting empty on a busy, four lane street, and started yelling and swearing at the woman — and then pulling on her door handle! It was terrifying. I opened my door to try to help — talk him down, or call the police, or take a picture of his license plate or something — but realized I couldn’t leave the little girl alone. I had my phone out to call the police, but before I could the man jumped back in his car and drove off.

There has been more snow in the past two weeks than Boston’s average for the entire winter. And another foot or more is coming this weekend. I feel like shouting, like Grover, “STOP TURNING THE PAGES!” Or maybe borrowing the exclamation of the gentleman on the bus. If we could stop turning the pages, maybe we could stop the snow from falling, and maybe that would stop the monster from coming. But, in the end, if it turns out that the monster was only ourselves all along, would that be any better? I already bit my own hand — what damage will I do if the snow keeps coming? And the man who leaped, roaring, out of his car — what will his monster do if we get to the end of the book? I am scared to find out.