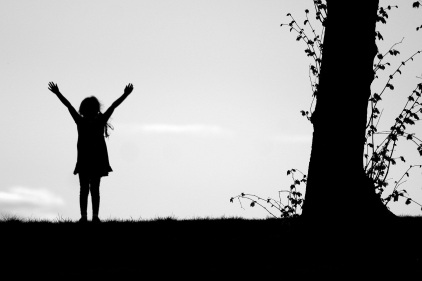 I spent most of my life believing that if I said and did exactly the right thing no one would get mad at me, no one would misunderstand me and everything would work out. Every time anyone was mad at me, I took it as a personal failure, and tried to figure out what I’d done wrong and what I could do differently the next time. I mean, EVERY TIME. It was, and is, exhausting. Constantly replaying and rehashing each interaction, no matter how small, as if my brain were perpetually tuned to sports radio after a big game, analyzing the plays and the players, the coach’s decisions, the referee’s calls, the weather, the history, the fans.

I can’t remember exactly when it first occurred to me that there might not be the perfect thing to say, and that other people’s flaws and imperfections might be contributing to misunderstandings, too. It might have been college. At various points over the years that thought came back, and I’d have a few moments of peace. But then I’d go back to living as if I could figure out how to do the right thing and make every relationship and every interaction go smoothly.

Yet all the time there was something strong and confident within me that knew that I was trying my best, knew that I was examining my heart and my motives and being as honest with myself as I could, and wanted me to stand up for myself. She was a child in many ways, strong and stubborn, tearful yet not backing down. I often tried to push her down and tell her she was too childish, too proud. I told her what the adults had told me, that she was too stubborn and defensive, that she had to be humble and willing to see her faults and weaknesses, that she couldn’t always be right. I pushed her away and pushed her down. But she never left. She stayed there, at my center, refusing to be broken.

So this was my constant struggle, my self analysis and self denial, always going on internally but sometimes bursting out of me in frustration when I couldn’t make things right, no matter how hard I tried. And then, in 2009, a woman moved into my community. She was angry with me almost from the beginning. She misunderstood almost everything I said. And my self analysis kicked into high gear. I prayed constantly that I would be able to be a better friend and community member to her. I apologized for things she said hurt her, even when my meaning was completely different than what she took from my words. I tried to speak better, to follow the rules that she laid down, to say the right thing so as not to make her mad or hurt her. But the more I prayed and repented and tried to change, the more she said I was hurting her and the more anger I felt from her. A lot of things were going on in my life that needed my attention and energy, but I was putting 99% of it into trying to figure out how to speak and act and BE in order to make things right with this one person. And we lived together so there was no escape from the situation. I couldn’t speak, even to someone else while she was there, without being told I was wrong. After a while I stopped speaking almost entirely. I stopped coming out of my room. I felt like I couldn’t breathe.

Then, one day, when she had been upset with me about something she thought I’d implied, and I’d tried to explain what I’d really meant, she wrote to me in an email: “You are the most defensive person I’ve ever known.”

That stopped me in my tracks.

I thought, is that really possible? Am I really the most defensive person in the world, despite my best efforts?

Then I thought of the hours of prayer, of tears, of analysis, of effort I’d put into the relationship, and I thought, surely there are people who don’t put this much effort into figuring out what their flaws and faults are. I can’t be THE most defensive person she’s ever met. I feel like the least. I feel like I have no defense at all against this situation. I am not letting myself defend myself — I’m even going so far as to join in the attack.

And then I thought of that little girl. And I suddenly loved her so much. I suddenly thought, she’s right! She’s just a little girl but she’s trying to stand up for us. She’s trying to let us BE, let us LIVE without this constant struggle. She is doing what I won’t allow myself to do. She knows who she is. She knows who I am. And suddenly the words, “You are the most defensive person in the world,” took on another meaning to me. I thought of that little girl and I thought, GOOD! I WANT her to be defensive. I WANT her to protect herself and care for herself. STUBBORN and DEFENSIVE are good things! My community-mate might have thought she was saying something negative about me, but I realized — it was compliment! The little girl can defend herself! She can take care of herself. I can take care of myself.

And then I realized that I’d found what I’d been looking for all along: The thing that I was doing wrong, my fault, my flaw.
My fatal flaw turned out to be believing that I had a fatal flaw in the first place.

And so I stopped. I stood up for myself, in that relationship and in my head. I took Maya Angelou’s words as my truth: “You did what you knew how to do, and when you knew better you did better.” I stepped out of the striving and the analyzing and the “maturity” of self examination and I stepped into the skin of the strong little girl, who was stubborn and defensive and glad. I stopped repenting except when I was truly convicted of having done something wrong. And when that happened I said I was sorry and then forgave myself, regardless of whether the other person did or not.

It didn’t make that relationship better. If anything it made it worse. But it gave me back my life and my self. It gave me the energy to focus on the things I needed to do in my own life: My own healing and strengthening, my career, my other relationships, my faith. And eventually it gave me the strength to leave the community.

And now, of course, I forget that lesson. I forget all the time. Especially in Boston traffic. For some reason it’s so hard for me when people honk at me. I go back and watch the replay, listen to the commentators in my head, try to figure out how I could have driven better so as not to have gotten honked at. I have to remember, yet again, that it might not be my fault. Other people might have been driving poorly, or the driver might have been having a bad day, or she might have been honking just because people in Boston honk at each other. Or it may actually have been my fault. But that’s okay. As Ralph Waldo Emerson told himself,

“Finish each day and be done with it. You have done what you could. Some blunders and absurdities no doubt crept in; forget them as soon as you can. Tomorrow is a new day. You shall begin it serenely and with too high a spirit to be encumbered with your old nonsense.”

Blunders and absurdities! That does sound like me. But I do try my best, and I will try my best again tomorrow. I will tuck the little girl into bed with praise and a glass of water. And I will let myself rest, as well.

44 comments on “Things I’ve been wrong about for most of my life, part one.”