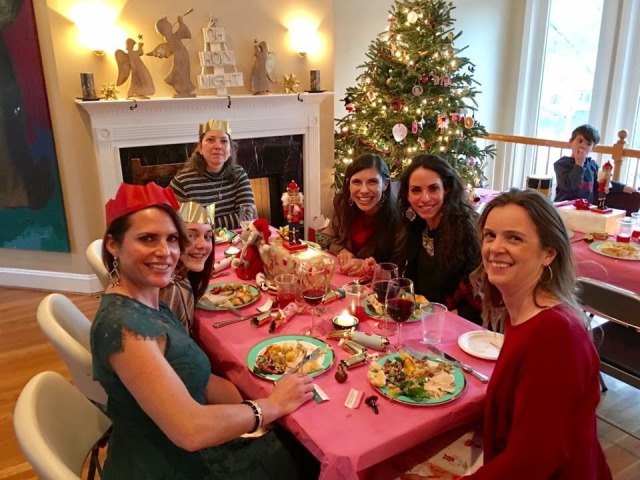 My family had our Christmas celebration a week early this year to accommodate everyone’s schedule, so Mark invited me to his family’s Christmas dinner. It was a lovely time, with delicious food and fascinating people. I met people I’d heard Mark talking about for years, and found them every bit as interesting as he’d described. When we sat down for dinner I joined a table with Mark’s three sisters, a niece, and two wives of Randa’s husband’s brothers. I loved our conversations about work, introversion, and social media, and the fun of opening our Christmas crackers, sharing the jokes, and trying on the crowns.

A few days later, Mark’s sister Randa posted the picture above of our table on Facebook. It’s funny — when I sat down at the end of the table there was an empty seat next to me, but I figured someone would sit there. Karen, Mark’s sister (in the red crown) noticed I was all alone at the end of the table and tried to draw me in, which I appreciated. But I didn’t feel alone or left out, I just felt happy, surrounded by all those lovely, interesting people. I wasn’t expecting anything, wasn’t needing anything. But what I received was so amazing — great conversation, great food, the warmth of the fire, and even a gold crown. And after the picture was taken Mark’s other sister, Suzy, sat down next to me, filling out the table and completing the circle. It wasn’t until I saw this picture that I saw what Karen had seen — me looking alone and apart. It made me think.

I hadn’t felt alone at the gathering, partly because Mark’s whole family was so loving and welcoming, but partly also because being alone wasn’t the story I was telling myself. But to be in that place, where I could be sitting slightly apart and not feel sad and lonely, really feels like a miracle. I think it is a miracle. Because that was my internal narrative for nearly 40 years, that I was left out, different, doomed to be alone. I felt such pain for so long, when I was alone and when I was with others. Even in my family small things would make me feel slighted and unloved. There was a deep pit of pain at my center, and I spent so much of my life trying to find a community where I would fit in and finally feel at home. I caught glimpses of that community over the years, but could never quite make myself a part of it. In my college fellowship, in seminary, in Maine with friends who had a farmhouse and a band, at Park Street Church, in ministry with InterVarsity, and finally in an actual intentional community in Boston where I lived for seven years. There would be moments of warmth, sitting around a fire singing, or reading from a prayer book, eating a hearty meal, talking about God or literature. But then my inner narrative would kick in and I would feel outside, apart, misunderstood, left out. So as I sat at the table and broke bread with Mark’s family, it felt miraculous to feel whole, to be able to be present and happy without that deep inner pain.

It is a miracle, but it has also taken so much work. The Enneagram helped so much, as did Henri Nouwen, Frederick Buechner, Thomas Merton, and Esther Ekhart. It took years, but I rewrote my story. Instead of a story of someone alone and on the outside I started to tell of someone deeply loved and whole. I told the story of someone who was quirky and a little awkward, but also smart and witty and warm. I told the story of someone who loved being alone and creative, but could bring that solitude and imagination to her relationships. And then I told the story of a woman who could be a home for others, with a crackling fire and prayer books within herself, who could welcome in those who felt alone and outside. And when I learned to stop grasping and to let go of things and people I couldn’t have I found myself surrounded by love and friendships I couldn’t have imagined before.

It is an ongoing lesson, of course, and envy is still my besetting sin. When Randa posted this picture on Facebook I did feel a twinge of loneliness and envy. I wished I had leaned in to the picture and smiled better, wished I had photographic evidence of my inner feeling of inclusion. I wished I could prove to the world that I was “in”, that I was loved. But then I did what I have learned to do, from Henri, from Esther, from the Enneagram: I sat with the feeling without either running from it or letting it define me. I observed it, and asked what it had to teach me. I remembered that I am loved, that I am whole. And then I wrote about it, turned it into prose, transformed it into an essay that can hopefully be a warm, inviting home to my readers: Welcome to your community, welcome to the party. You are loved and whole and part of the family. You are quirky and maybe a little awkward, but we love that about you. Come sit at our table, take the seat by the fire. There is room for you here. We’ve been waiting for you.

If you need help imagining the coziness, here’s some audio from the Gryffindor common room.

If you relate to what I’ve written, you might want to check out Henri Nouwen’s book, The Inner Voice of Love: A Journey Through Anguish to Freedom or the practice of contemplative prayer as written about by Thomas Merton. You may also want to check out the Enneagram: Richard Rohr‘s book is a good place to start. (If you relate to envy as your besetting sin you might be a four like me!) 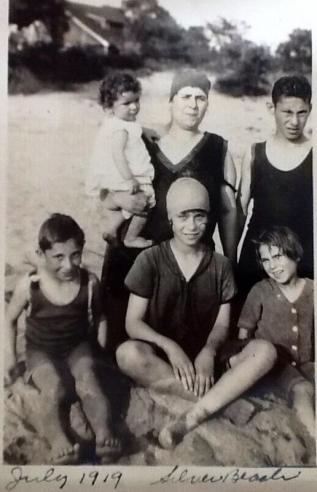 The Schines at Silver Beach. My grandmother Beatrice is at the bottom right.

My grandmother Beatrice was born in 1913, and died in 2004, a few months after my 30th birthday. She was my last living grandparent. It has been hitting me again lately, that I have lived for more than eleven years now without grandparents. I saw my beautiful great-aunt Anne over Christmas, my grandmother Helen’s sister, and I felt the fifteen-years loss of my grandmother again. I’ve written in this space of my grandfather, John, Helen’s husband who has been gone now for almost twenty years, and of his brother Rajmund, who continued to work on the farm where he and John grew up until his death two years ago. My other grandfather, Beatrice’s husband Ralph, died when I was just a baby.

“Why are all grandparents rich?” nine year old Z asked me the other day.

“Do you think they are?” I answered, ever Socratic in my nannying.

“Well they’re always sending me money,” Z replied, and I smiled, thinking of all the birthday cards throughout the years, checks tucked carefully inside.

“I don’t know that they’re all rich,” I answered, “But they’re generous, and they love you.” On my mother’s side the checks and cards were always in my grandmother Helen’s handwriting, but once when I visited them on my own, from college, my grandfather John pulled me aside right before I left. “Don’t tell your grandmother,” he said, and pressed a carefully folded hundred dollar bill into my hand. It is one of my most precious memories of him. I know what a hundred dollars meant to him.

When I was twenty-two I wanted to do something generous myself, so I dialed the phone number for ChildFund International and asked to sponsor a child. They assigned me a boy from Uganda, and I sent him a small check every month, plus others on his birthday and holidays. After a while I set up my bank account for automatic withdrawals. I was never good at writing letters, and the small amount of money leaving my account every month never pinched. It really felt like the least I could do, literally the least, and sometimes it bothered me that it was so little. But when I was sick and had quit my ministry job and a nanny job, lying in bed feeling broken and useless, I would remember the little bank withdrawals, and read the thank you letters, and feel so grateful. My debt was piling up at the time, my last check from my grandparents cashed and spent, but I never considered giving up my sponsorship. I couldn’t do much, but I could keep sending that little bit. Plus, in 2005, a miracle had happened.

About a year after Grandma Beatrice died, my little boy from Uganda aged out of the program, and I signed up to sponsor another child. They asked me what country I preferred, and I chose to stick with Uganda. Girl or boy? they asked, and I said, it doesn’t matter. A few days later I got my packet in the mail. 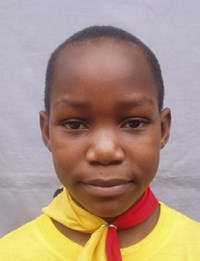 My first picture of Beatrice N.

It was a little girl named Beatrice.

For the first thirty years of my life, my grandmother sent me cards with checks tucked into them, and I sent her thank-you notes. For the past ten years, I have sent money to another Beatrice, and eagerly read her letters. Beatrice to Jessica, Jessica to Beatrice. Do you think the mailmen have noticed?

I don’t have children of my own, so I probably won’t ever be a grandparent. But what a blessing to have had two children in Uganda that I can give to in some small way, children that grew up writing thank you cards just like I did. I hope they know that I am not rich, but that I love them, and that a very little bit of generosity on my part has been more than repaid, in fact, has been prepaid through my grandparents’ love for me.

Beatrice N. recently graduated from college and will turn 22 this month. Congratulations, dear one, and happy birthday. I’ve sent my little gift. Imagine it tucked discretely into a card, signed not just by me but by Helen and John, too, and Ralph, and another Beatrice, with all our love.

Are you following me on Facebook? Come join the conversation!

To find out more about sponsoring a child through Child Fund International, go to https://www.childfund.org/.