I’ve been posting a lot of selfies this weekend. There’s a reason for that.

I’ve been in pain almost every day since New Year’s Eve. A bad decision to push too hard at the gym led to one of the worst migraines I’ve ever had, with an aura that lasted so long I went to urgent care (and had an MRI, which came out slightly abnormal but probably just because I still had the migraine when they took it). That migraine lasted five days, but I’ve had what feel like after-shock headaches since then — more frequent-than-usual breakout migraines with a lot of nausea and vertigo.

I was at the gym because I gained 20 pounds in 2017, which happened because my foot problems have flared up, which has also meant that my feet have been in pain almost every day and also that I can’t go for walks (or runs, hikes, etc.). At the end of 2016 I injured my shoulder doing physical therapy for my foot problem, and that has hurt to some degree almost every day since, and also means I can’t do much yoga or swimming. Yoga was helping my feet, by the way. So.

It’s been discouraging. I keep pushing forward, though, doing a little yoga here, a short walk there (and then ice my feet and stretch), a swim when my shoulder’s not so bad, a short workout on the stationary bike but not too hard or it might trigger a migraine. None of this is going to burn off those 20 pounds, though, at least not quickly, so I need to learn to live with them in the meantime.

Here’s what I wrote a couple of years ago about my practice of taking selfies as a way of reclaiming my beauty and stepping back into my body.

I took my first selfie back in 2006 and it was a revelation. It felt like art, like self-examination and self-discovery. When I joined MySpace and then Facebook and could post and share those photos it became almost a political act. To post a selfie was to say, “Look how beautiful I am!” and society doesn’t quite approve of that. If you are beautiful, you are not supposed to brag about it, and if you are not conventionally beautiful you are supposed to accept your place and not go against convention. Either way, you are not supposed to believe in your own beauty. For one thing, where would all the makers of beauty products be if women got out of bed already loving ourselves? And there’s a snarkiness there, too, we women judging each other. A pretty photo taken by a friend is okay, but put the camera in our own hands and we start to whisper, “narcissist.”

I love the camera in my own hands. I love to paint portraits of myself, to see my different angles, to turn the camera on when I am sad, or celebratory, or angry, to see what that does to the muscles in my face. I have learned about myself through taking my own picture. And I have learned to love myself, too. We are strangely disconnected from our own outward appearance, especially those of us who tend to be lost in thought. Sometimes when someone speaks to me I startle, surprised that they can actually see me, when I myself feel far away, as if I am watching the scene around me through a screen. It’s good to see myself on the screen sometimes. It’s grounding. I feel more present, I feel like a spirit with a face and body, more like the people whose faces and bodies I see every day.

This month in my selfies I’ve been able to see the pain and fatigue in my face, the paleness of my skin that goes deeper than just summer’s faded tan, the double chin when I accidentally turn the camera on when my phone’s in my lap. I’ve been finding the discouragement sinking towards depression, and not being able to get a good selfie has become symbolic of that depression.

So Friday night on the way home from work I bought a tube of Burt’s Bee’s reddest lipstick, Scarlet Soaked (look, it has a honeycomb on it!), and spent some time with my eyebrows and the tweezers. Then I took some selfies. I was determined to get a picture of myself that I could see the spark of life in.

Here’s what I’ve learned about selfies: You have to take a lot of them. You have to try different angles, different poses, different lighting, different settings. It’s an art form, like any type of photography. A few of my friends told me after my first essay that they didn’t like their own selfies, and so I feel like I have to make this clear: I don’t like most of mine, either. I delete nine out of ten. Some I delete so fast I re-injure my shoulder. I pick the best ones to share.

And here’s the other thing I feel it’s important to know: Sharing the best out of a series isn’t lying, to yourself or to others. I used to think that the bad pictures were how I really looked, and the good ones were a kind of self-deception. Here’s the thing — pictures aren’t how you look, anyway. You’re three dimensional. You’re constantly in motion, blinking, swallowing, drifting from one micro-expression to another. No photograph captures exactly how people see you. Pictures are a portrayal of you, a part that evokes the whole. When you take a selfie you’re creating a picture that evokes you, to you, in order to share that with other people. You’re searching for yourself, hoping you’ll recognize her when you see her.

This morning I was struggling, feeling like depression was tugging at my pant legs, trying to pull me down. I cried for awhile, then drank a glass of water and felt a little better. (Have you ever noticed how good water tastes after a cry?) Then I got dressed in a nice blouse, put on some earrings, some mascara and powder, and the Scarlet Soaked.  I took some selfies and then I sat for awhile and played games on my computer. I still felt low. But I was wearing make-up, so I decided to leave the house. I grabbed my notebook with the book proposal in it, and a to-go mug (save the earth!), and I walked to the coffee shop. No one seemed to find it strange that I was wearing red lipstick. I guess people do that.

I took my notebook out and realized I hadn’t brought a pen, so I looked though my selfies on my phone as I drank my coffee, and then I went for a walk in the Arboretum. The coffee and the fresh air were clearing my head. My feet hurt a little bit, but it felt so good to be outside and moving. I took a few more selfies, as well as some pictures of the brown-toned woods: bare trees, dried grass, and mud, with small patches of snow here and there. Back at home I took a selfie with my cheeks red from exercise and the cold air, hair mussed from the wind.

And I finally saw myself. There I was. I was still in there, still imagining and dreaming and hoping. Still able to shape my eyebrows pretty well, if I do say so. I think I’m going to be okay. Maybe you are, too? I think so. Stick around, we’re going to need someone like you here. Just like that — no, chin up a little bit…find your light…THERE you are. I see you. 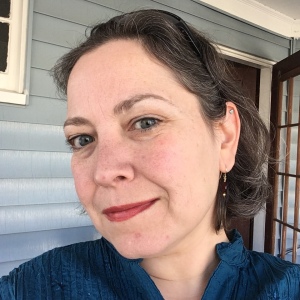 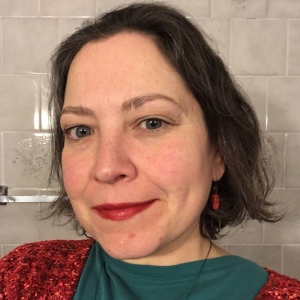