I saw a great horned owl at the Arboretum last weekend. I bundled up and set out for a walk on the last day before the temperatures were forecast to settle below freezing, where they are now. I walked briskly over Peter’s Hill and to my favorite section, Conifer Path, where the color palette changes to ocean blue and dark green with subtle reds here and there, and the noise of the nearby street and of your own footsteps is softened by the layers of pine needles. I wish I had a better camera but I will try to describe to you how lovely it is there, in all seasons, but especially whatever the current season is: now, winter, with patches of snow adding even more visual interest and softness. White is beautiful in itself, but it also highlights the beauty of the colors around it; it is a neutral color, a team player, clashing with nothing, strong enough to cover everything but delicate enough to surrender quickly to the yellow of dogs’ urine and the brown-ish red of the autumn leaves that are stirred from under the snow by the wind and my fellow hikers.

For some reason, when I first heard the owl calls I assumed it was a human making them. I think I wanted so much for them to be real that I forced myself to doubt them. I even grew annoyed, as the calls went on, wishing whoever was making them would stop trying to trick me and let me enjoy the woods in peace. I crossed over from Connifer Path to Oak Path, skirting Bussey Hill because I didn’t want to push myself too hard and get a migraine, but when I came to Chinese Path I couldn’t resist and hiked uphill past Explorer’s Garden, almost to the top of the hill, then followed the road back down and retraced my steps through the conifers.

I was almost back to the main road when I was distracted by a stream, and started wandering along it, crunching the damp, half-frozen ground underfoot and taking pictures with my cheap camera phone. Here’s the only one that came out okay, a picture of my own reflection in the stream. I love how the moving water looks like an abstract painting, and how you can see the rocks at the bottom of the stream where my reflection blocks the sun. I love photography. One of these days I’m going to get a nice camera.

As I was wandering along the stream I heard the owls again, the iconic hoo followed by three shorter hoos. The first owl would do the call, then another would repeat, but in a lower pitch. Suddenly it occurred to me that there were real owls in the Arboretum, and a second later, that I might be able to see them. I set off slowly across the slope that led back to Conifer Path, pausing to adjust my direction every time the owls called out. I soon honed in on a group of some of the tallest trees in the area, Giant Sequoia, maybe, or Japanese Cryptomeria. They created a cathedral-like space, darker and quieter than the outside world, and I found I was one of four people tiptoeing into that church, looking up to try to catch a glimpse of the birds. The others were two women and a girl of about nine or ten. We glanced at each other and smiled a greeting, raising our eyebrows in wonder, wordlessly agreed to a vow of silence so as not to scare away our avian hosts.

Then, one of the owls soared from the top of one tree to another, and we saw it, for a moment. My heart rate quickened and I caught the eye of one of the other women and mouthed, “WOW.” We continued to look and listen, but the owls didn’t reappear. A few minutes later another woman tromped into the piney cathedral, speaking loudly, and calling to her dog, and the spell was broken. The owls wisely turned quiet as we humans talked, sharing what we knew about the owls. One woman said a male great-horned owl had been killed last year, and people wondered what the two or three females were going to do. We agreed that this pair sounded like a male and female, and I confirmed that later on the website All About Birds:

“Great Horned Owls advertise their territories with deep, soft hoots with a stuttering rhythm: hoo-h’HOO-hoo-hoo. The male and female of a breeding pair may perform a duet of alternating calls, with the female’s voice recognizably higher in pitch than the male’s.” The others said good bye and dispersed and I found a comfortable tree root and sat quietly for a few minutes, hoping to hear the owl’s conversation start up again. But after a while I grew too cold, and realized the sunset was coming, so I waved good bye and headed back down the path, over the stream, and back home.

Each mortal thing does one thing and the same:
Deals out that being indoors each one dwells;
Selves — goes itself; myself it speaks and spells,
Crying Whát I dó is me: for that I came.

On my way back from the Arboretum, there is one of those Tiny Free Libraries; an adorable little yellow one in the shape of a house. You are encouraged to take a book or leave a book, whichever you prefer. I noticed that the owner of the library was very hands-on in rotating the selection, so that almost every time I walk past there are new options to choose from.

I noticed this about the rotating selection, but for the first two years I walked by I failed to notice something else about this TFL, the most fun thing: It’s a model of the house behind it.

This makes me more happy than I can express. But the best part so far, I am so excited to tell you, was that last December, when a large Christmas tree appeared on the covered porch of the main house, a tiny Christmas tree also appeared on the covered porch of the library. I can’t help but feel that anyone with such imagination and dedication to this project must be enjoying life very much.

I say móre: the just man justices;
Keeps grace: thát keeps all his goings graces;
Acts in God’s eye what in God’s eye he is —
Chríst — for Christ plays in ten thousand places,
Lovely in limbs, and lovely in eyes not his
To the Father through the features of men’s faces.
~Gerard Manley Hopkins

I love children, and I love being outside, and possibly my favorite thing in the world is being outside with kids. It is the best part of April through November, and occasionally we still make it outside in the winter, too. One afternoon in December I stopped at Lars Anderson park on the way back from picking up the 9yr old and 5yr old from school, and wrote this note afterwards:

I was going to write about how I wished I had a better camera, how these pictures from my cheap phone couldn’t convey the exquisite joy of running up a sunset-streaked hill with two boys, the little one full of pride and purpose because I said to his big brother, “N’s in charge of the expedition!” finding a giant, spiky bush that had overgrown a glacier-dropped rock on the hillside, crawling inside and clambering around until we realized that the rock was the entrance to a troll’s lair and the troll was coming, running out and away to one of our favorite climbing trees, climbing for a while as the sun dipped closer to the horizon and the air became colder, and then making our way back down the hill to the car, I walking and the boys rolling down faster than I thought was possible for the human body to roll, then running back up and rolling down again. 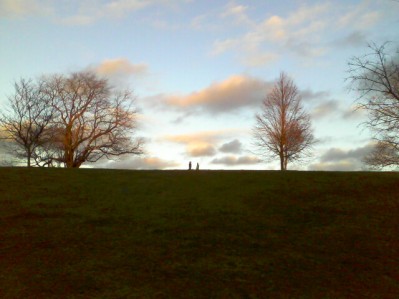 I took a few pictures but I was planning on using them mainly to say “it was like this but a thousand times more gorgeous.” But then I saw this one, and I think it actually conveys the moment quite well. This is when the boys ran back up the hill to roll down for a second time, while I waited for them at the bottom. A bit blurry, but I love the composition with the boys silhouetted against the eastern sky almost exactly at the center of the photo. That’s our climbing tree to the left.

Such beauty all around. Sometimes even a cheap camera phone can’t help but capture it.

More about the Hopkins poem, and why I named my blog after it can be found here: Ten Thousand Places

Are you following me on Facebook? Come hang out!