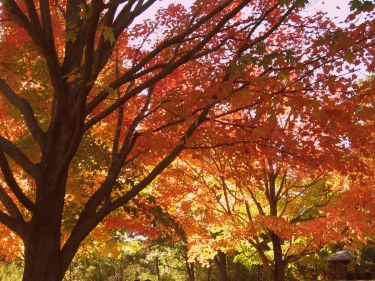 I wrote last month about how October was so beautiful it was almost too much. The flaming red and orange maples against the blue sky roused in me a joy that was so intense it was almost overwhelming. The colors were so vivid and everywhere — from the trees to the ivy to the little shrubs. It seemed like so much beauty, such reckless extravagance, when a quarter of it would have been beautiful enough.

I love the fun, rolicking tune, the repetition of dayenu in the chorus, and the shift of the emphasis to the last syllable with the melodic resolution, “day dayenu, daYEnu dayeNU.”  And I love the idea, that God’s gifts are complete in themselves, that we can think about any one thing that God has done and be content with that, but that He wasn’t content, that He continued to multiply blessings, one on top of the other. Reckless extravagance.

And then the end of October came, and November blew in with a rain and snow storm. The wind blew many of the early leaves off the trees and the ones that were left were not quite as bright: browns and burnt oranges, the later maples and the oaks. The ghost-like grey of the naked trees.  The days grew shorter and colder and there were more grey skies. And it is beautiful. It’s a quieter kind of beauty, but I almost love it more. I feel like I can look around and take everything in. In October I almost didn’t know where to look, there was just so much color everywhere. October was amazing, and I thank God for it. But we could have gone right from August to November and we still would have been blessed with abundant beauty. November would have been enough. Dayenu.

3 comments on “November would have been enough”