Sixteen years later, I finally looked it up and I wasn’t imagining it, I could see across the water from Dahab, Egypt to S.A. I found this pretty picture on wikipedia.

The Gulf of Aqaba is about 15 miles wide at this point. At the time I had no idea how wide the the Gulf of Aqaba was or if it was possible to see across it. I thought maybe I was seeing an island. Here it is on a map. 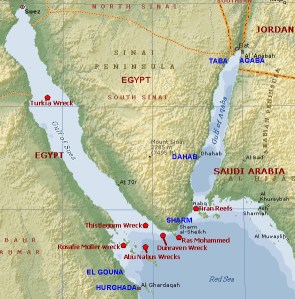 I’ve always wondered about that. I’ve also seen Jordan across the Dead Sea, which was really cool, and Lebanon through a gate which had Isaiah 2:4 written on it: “They will beat their swords into plowshares and their spears into pruning hooks. Nation will not take up sword against nation, nor will they train for war anymore.”