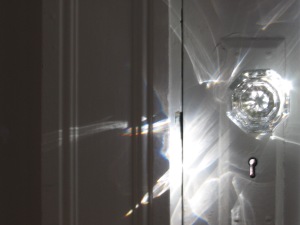 A couple of months ago Mark and I had a falling out with our third housemate, and decided to look for a two bedroom apartment. For those of you who don’t know, Mark is my good friend and long-time housemate. We lived in an intentional Christian community together for several years, and four years ago moved into a three-bedroom apartment and have been renting out the third bedroom. It was a good plan, I think. We needed to leave the community, and our incomes are both on the low side, and this way we’ve been able to rent out the larger bedroom and pay a little bit less.

I was in the Christian community for seven years, and it was a hard seven years. In many ways it was a toxic environment for me, though despite that (and maybe a little bit because of it) those were years of a lot of inner growth. But it was a community, a family, and hard as it was I was scared to leave, to go off on my own. I was so scared I kept putting it off, year after year, crisis after crisis, until the time came when the decision was taken out of my hands and I had to leave. Mark and I started looking for three bedrooms. We trekked around Boston with realtor after realtor and saw some awful places. Tiny apartments, filthy apartments, bizarrely shaped apartments. It was extremely demoralizing, and the days until we had to move were ticking down. Then we found this place.

This house, where we’ve been for the past four years — it’s gorgeous. It’s spacious and sunny, up on a hill on a tree-lined street, with two porches, a great view, and rabbits living in the back yard for crying out loud. The third bedroom is actually two rooms spanning the whole third floor, so we were able to rent that out at a higher rate than we paid for our bedrooms. I have no idea how it was in our price range, or how we were the only viable applicants. Just to add to the drama and the miraculousness of it all, the landlords didn’t accept our application at first but decided to have another open house — and no one showed up! So at the eleventh hour, just days before we had to leave the community, we signed a lease for Primrose Street.

This house has been such a place of healing for me. After years of struggling in the community and being afraid to leave I found myself spending glorious solitary hours sitting on my porch watching the sun set over the hills as the birds sang in the trees all around me. I rolled out my yoga mat in the large, wood-paneled living room, in front of the working fireplace, and felt my body healing as I stretched. In the winter I chopped garlic and onions, potatoes and carrots in the kitchen and filled the house with the smell of hearty soups. I bought viney plants and watched them slowly take over mantles and bookshelves. I chatted with Mark in the evening, grateful to have a friend to talk to and grateful when we went to our separate corners of the house, introverts respectful of each other’s need for solitude. I’d been so scared to leave, and look where I’d landed. My heart rose up with the words of the Psalms:

Lord, you alone are my portion and my cup;
you make my lot secure.
The boundary lines have fallen for me in pleasant places;
surely I have a delightful inheritance.

I felt God’s message to me in my very bones: “Don’t be afraid.” As Frederick Buechner has so beautifully expressed it in his definition of grace: “Here is the world. Beautiful and terrible things will happen. Don’t be afraid.”

But almost as soon as we’d moved in here I knew there would come a time when we’d have to leave, and I knew it would be really hard. I thought that time would be when our landlords decided to move into the house themselves, since that was their long term plan for the place. But after this last experience of disagreements and miscommunication with the third housemate, Mark and I both agree that we don’t want to have to keep finding and coping with a third person. For even as the house has been such a wonderful place of quiet and healing, there have been conflicts and struggles with our various third housemates. Beautiful and terrible things seem to always come together, don’t they?

It was a hard decision, but I know it is the right one. And I don’t want to be afraid of moving on to the next thing. I was afraid for so long before, and then when I wouldn’t take the leap of faith myself I was pushed, and landed somewhere wonderful. I don’t want to be afraid again. I want to trust that the same Spirit that led me here will lead me to the next place.

And now, right now as I type, we are in the eleventh hour again. We’ve given notice here for June 30th and we haven’t found a new place yet. We thought we found something but it fell through yesterday afternoon. Today is June 16th, officially less than half a month till we have to be out of here. Two weeks, if you prefer things in tidy sets of seven. Mark is in Connecticut helping with his grandmother’s funeral preparations. Right when things got crazy here with our housemate Mark’s mom broke her arm and his grandmother started failing, so he’s been down there for three months now while I try to handle things up here. We’re both struggling with health issues both chronic and acute. Everything seems to be happening at once.

Last night, in the midst of all of this, some good friends from my days in the community came to visit. They are a family of five and one of the things that made it so hard to leave the community, and I’ve greatly missed popping next door to hang out in their kitchen, or Shima stopping by for some of the iced coffee I always had on hand, or the kids knocking on my bedroom door to tell me about their adventures. They sat in my kitchen last night, amidst the moving boxes, and we caught up. They had just bought a house in Atlanta, and Steven shared with me how impossible everything had seemed. He’d applied for a promotion with a pay raise that he wasn’t sure he’d get, they’d been living in a rented house far too small for them, and buying a house seemed out of the question.

“All these pieces had to come together and it seemed impossible,” Steven said, “And I prayed and said, ‘God, you’ve got to make this happen, because it’s not something I can do. It’s all in your hands.'” And they did come together, all of them.

“Yeah!” I said. “That’s how it is for us, now. But you know, it’s better this way, because we see the reality of the situation. Everything is in God’s hands, but the people with all the money and resources don’t realize it. They think they’re in control, but that’s just an illusion.”

I’d been stressed out when they said they’d texted to say they were coming by last night, because everything was happening at once: We’d gotten word of that one apartment falling through just as I was loading the toddler I nanny into the car to pick up his sister from kindergarten, and Mark and I were trying to communicate about maybe appealing the decision and next steps if that didn’t happen. But what a blessing to spend time with old friends from the community I’d been so scared to leave, to hear how God had provided for them, and to exchange words of encouragement and hope. Shima said she’d pray for me, and I felt confident that God would hear her.

And how wonderful to have evidence of God’s redemption in the flesh, old friends who had been through the hard times with me, who have had hard times themselves, to embrace each other with forgiveness and love. Turns out I hadn’t left community behind — it came with me, and it will come with me on this move, too. I will set my viney plants on other mantles, roll my yoga mat out on other floors, and other birds will sing on other trees outside of other windows. There will be beauty, and there will be pain, because life always has both mixed together. I don’t want to be afraid.

5 comments on “On moving and moving on”