The other day I took the three kids I nanny to the Arnold Arboretum. The two “big” kids, four and two years old, took their bike and scooter, while I pushed the baby in the stroller with the diaper bag, lunch boxes, water bottles, sun screen, and all the rest of the paraphernalia that comes with three small children.

I work ten hour days at this new job. I took it because it gives me Wednesdays off, which I theoretically use for writing and editing. But ten hours is a long day, and three kids is more than I’m used to, and so it has been an adjustment. I miss the leisurely days with my last charge, a sweet little girl whose personality was similar to mine — we used to go and people watch, and wander dreamily around, having little adventures. Fun and learning opportunities were everywhere, and it never really felt like work.

I love these new children, too, but when there are three things get more practical. The focus tends to be more on keeping everyone safe, diapered and toileted, fed, getting along, and napping when they’re supposed to or need to. I try to do things that they’ll enjoy, of course, but I can’t enjoy those things as much, and the special times of bonding one-on-one do come, but they are moments here and there rather than the entire day.

So we were at the arboretum, finally, after having made and packed four lunches, covered all exposed skin with sun screen, and buckled helmets onto the heads of the biker and scooterer. And I thought longingly of the bonsai trees, through the woods and up the hill, and how much fun it would be to bring the kids there. But the path was gravel and long, and I knew the kids would have a hard time with their vehicles, and I couldn’t carry a bike and scooter in addition to all the other stuff. Just pushing the stroller up the hill would be hard, and it was a hot day, and only ten o’clock in the morning — eight hours to go. Probably I should pace myself.

Then, suddenly, I decided joy was more important than ease, and I turned to the kids:

“Do you guys know there is a garden here with tiny little trees? They’re so beautiful, it’s almost like magic, like a little fairy kingdom. Do you want to go see them?”

“I just have to tell you that we’re going to have to go down a long path and up a big hill. It might be hard to bike that long way.” I looked at the four year old and widened my eyes in awe: “So it’s a good thing you’re SO strong and brave, Evan! Let me see your muscles.”

“Yeah, I’m SO strong!” he piped up, excited, and pulled up his sleeves to flex his biceps at me. “I can do it!”

I knew if he were motivated his little sister would follow along. So, having given my little speech to the troops, I led the way. The gravel path did, indeed, prove a challenge, but they handled it like pros, with me proactively cheering them on every few minutes, before it could occur to them to complain:

“You’re doing so great! This path is hard, but you guys are so strong! Great job!” Meanwhile I leaned into my work with the stroller and tried to look around and take in the beauty of the woods. I am not a big talker, and my dual job as a stroller-pusher and cheer leader was tiring, but I pushed on. We made it through the woods and into the lovely shrub and vine garden — the last leg of our journey that comprised an uphill path that zig-zagged back and forth to the bonsai house on top. This part was in the open sun, and the job got hotter and harder. The four year old continued his brave push (his bike was much heavier than the two year old’s scooter), but his little sister started to cry, “I can’t do it! I can’t do it!”

As I looked back to assess the situation, I realized that, even though she was crying, she was still pushing the scooter; slowly, but steadily, a little bit behind her brother.

“You can do it, Callie!” I called out to her, wiping the sweat from my own face: “You’re doing it!”

For the last ten minutes of our climb, Callie didn’t stop crying, “I can’t do it!” and she didn’t stop moving slowly forward. Really, I could have carried the scooter for those last few yards, but I was kind of in awe of what was happening, the strength and bravery that our little adventure was bringing out in myself and the children. I had come out of my utilitarian focus and was excited about the kids, about the day, and about showing them the bonsai trees; Evan was reveling in his own strength and ability and working so hard, and Callie was succeeding despite herself.

Just when Callie’s cries were becoming more insistent I called out, “We’re here! You can leave your bikes and walk the rest of the way.” And they ran to catch up with me.

If you ever have the chance to see the bonsai collection at the Arnold Arboretum, you really should. They have an amazing history, and they really are like a little fairy kingdom.

This is the view from the inside of their little house, but visitors must stay on the outside to protect these precious little trees. 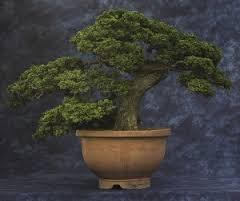 This Hinoki Cypress was started in 1787!